For our health, minerals and vitamins such as vitamin C and vitamin E are important. The latter two capture free radicals and protect our cells from oxidative stress. What role such antioxidants in the form of vitamins and phytochemicals, or the carotenoid astaxanthin play in the health of our skin, you will find below.

FORWARD: WHAT ARE FREE RADICALS?

Free radicals are aggressive oxygen molecules that form naturally and constantly in the body. On the one hand, free radicals originate from the body's natural metabolic processes, and on the other hand they are the result of reactions of oxygen-containing molecules with, for example, oxygen. B. UV radiation of sunlight. The molecule is split by the high-energy sun rays so that it loses an electron. If an atom unintentionally releases its electron, then it becomes a free radical itself and looks again like a desperate single for an electron. If the radical scavengers do not intervene, this electron claw does not end. To get back their missing electron, radicals react with everything they come in contact with. In the reaction with a free radical, the reaction partner itself becomes a radical - so more and more free radicals are formed in a kind of chain reaction.

Biochemically, free radicals are therefore considered unpleasant contemporaries, who have nothing else in mind than doing damage. They are anxious to get somewhere the missing electron without regard for losses. They also destroy molecules that are important to our health. Especially our skin is constantly exposed to them - one of the reasons why UV light makes beautiful brown, but permanently damages the skin and causes wrinkles.

WHAT FREE RADICALS TO ORDER OTHERWISE

In small amounts, free radicals are harmless and can be controlled by the body alone. Free radicals are dangerous for the skin when they occur in large quantities. In search of a reaction partner, free radicals attack body cells: they attack cell membranes and disrupt the functioning of cells by stealing electrons from them. Free radicals can even react with the DNA of skin cells, damage connective tissue and promote skin aging.

The education of such offenders is promoted by smoking, alcohol and environmental toxins. Oxidative stress not only causes aging, but causes many serious diseases, such as diabetes, Alzheimer's and cardiovascular diseases.

WHAT DOES THE BODY DO AGAINST FREE RADICALS?

Free radicals are constantly evolving, so our cells are constantly dealing with defenses. For this they use special enzymes that make free radicals harmless. For their activity, these enzymes require the minerals zinc, selenium, copper and manganese. We have to absorb these with the food - as well as other substances that support our organism in this fight: Antioxidants. 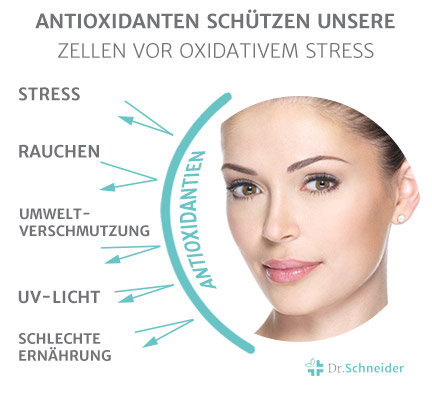 WHAT ARE NOW ANTIOXIDANTS?

Antioxidants counteract the described oxidation process by capturing the free radicals. This works according to a simple but effective principle: they voluntarily release an electron from the free radicals, rendering them less reactive and thus harmless. Antioxidants help trap free radicals before they cause damage. Unquestionably best known are vitamin C and vitamin E. But also riboflavin belongs to the antioxidants, as it supports the body's radical scavenger glutathione in his work. Some plants and herbal products have been proven to contain many and powerful antioxidants. This includes in particular green tea. In addition to vitamins C and E, green tea also contains zinc and flavanols, for example EGCG, to which an antioxidant effect is attributed. He is also said to contribute to a healthier skin. Tomatoes should also be good for the skin because they contain the antioxidant lycopene, which, among other things, protects the skin from the damaging effects of UV rays. Those who like to eat grapes profit twice: Resveratrol is found in the skin and grape seeds and OPC (oligomeric proanthocyanidins), both strong antioxidants, in the grape seeds. Likewise antioxidant are many other phytochemicals. Humans use their antioxidant properties with plant foods or supplements. Many phytochemicals are also dyes such as the carotenoids, which include the carrot beta carotene, or the astaxanthin. The latter is produced by algae, provides the red-orange color of crustaceans such as krill, salmon and flamingos and is one of the strongest natural antioxidants. One reason why krill oil is so valuable for our body.

Many fruits and vegetables contain vitamin C, vitamin E, riboflavin and numerous minerals. This explains why a diet rich in fruits and vegetables is so important to the health of our cells and our skin. Due to our hectic lifestyle and the often unsuitable composition of the food there are often nutrient gaps, which are noticeable in the absence of antioxidants in the body and on the skin surface. Therefore, make sure you have a good supply so that you not only feel vital and well-balanced, but also look fresh and healthy.

This website uses cookies to provide you with the best possible functionality. If you do not agree, the following functions are not available to you: